5 I am the Lord, and there is none else, there is no God beside me: I girded thee, though thou hast not known me:

15 Verily thou art a God that hidest thyself, O God of Israel, the Saviour.

17 But Israel shall be saved in the Lord with an everlasting salvation: ye shall not be ashamed nor confounded world without end.

18 For thus saith the Lord that created the heavens; God himself that formed the earth and made it; he hath established it, he created it not in vain, he formed it to be inhabited: I am the Lord; and there is none else.

11 He came unto his own, and his own received him not.

12 But as many as received him, to them gave he power to become the sons of God, even to them that believe on his name:

20 For the invisible things of him from the creation of the world are clearly seen, being understood by the things that are made, even his eternal power and Godhead; so that they are without excuse:

21 Because that, when they knew God, they glorified him not as God, neither were thankful; but became vain in their imaginations, and their foolish heart was darkened.

21 Tell ye, and bring them near; yea, let them take counsel together: who hath declared this from ancient time? who hath told it from that time? have not I the Lord? and there is no God else beside me; a just God and a Saviour; there is none beside me.

Acts 13:23 Of this man’s seed hath God according to his promise raised unto Israel a Savior, Jesus:

18 But grow in grace, and in the knowledge of our Lord and Saviour Jesus Christ. To him be glory both now and for ever. Amen.

23 I have sworn by myself, the word is gone out of my mouth in righteousness, and shall not return, That unto me every knee shall bow, every tongue shall swear.

9 Wherefore God also hath highly exalted him, and given him a name which is above every name:

11 And that every tongue should confess that Jesus Christ is Lord, to the glory of God the Father.

16 And without controversy great is the mystery of godliness: God was manifest in the flesh, justified in the Spirit, seen of angels, preached unto the Gentiles, believed on in the world, received up into glory.

14 And the Word was made flesh, and dwelt among us, (and we beheld his glory, the glory as of the only begotten of the Father,) full of grace and truth.

36 The word which God sent unto the children of Israel, preaching peace by Jesus Christ: (he is Lord of all:)

38 Be it known unto you therefore, men and brethren, that through this man is preached unto you the forgiveness of sins:

39 And by him all that believe are justified from all things, from which ye could not be justified by the law of Moses.

31 And they said, Believe on the Lord Jesus Christ, and thou shalt be saved, and thy house.

6 When they therefore were come together, they asked of him, saying, Lord, wilt thou at this time restore again the kingdom to Israel?

7 And he said unto them, It is not for you to know the times or the seasons, which the Father hath put in his own power.

8 But ye shall receive power, after that the Holy Ghost is come upon you: and ye shall be witnesses unto me both in Jerusalem, and in all Judaea, and in Samaria, and unto the uttermost part of the earth.

9 And when he had spoken these things, while they beheld, he was taken up; and a cloud received him out of their sight.

16 And without controversy great is the mystery of godliness: God was manifest in the flesh, justified in the Spirit, seen of angels, preached unto the Gentiles, believed on in the world, received up into glory. 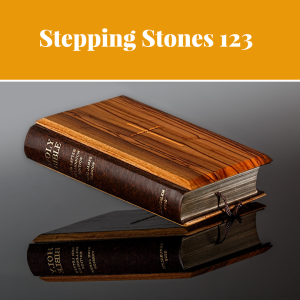 Check out my podcast, Stepping Stones 123, on Anchor